“Design and art are independent coordinates that provide their greatest satisfactions when experienced simultaneously.”Milton Glaser

The University of Southern California seeks an inspiring, empathetic and collaborative leader who is steeped in the visual arts to ensure and expand upon USC Roski School of Art and Design’s mission of preparing and empowering the next generation of artists and designers, curators and critics to develop visual literacy, experiment, take creative and intellectual risks, dare to create transformative work and uphold the highest standards of ethics, inclusiveness, and professionalism. This school is comprehensive, interdisciplinary and integrates all fields of art, design and critical studies under one roof. USC Roski School of Art and Design is part of USC, a major global research university located in Los Angeles, the most diverse and global city in America.

The new Dean will be an advocate for all aspects of art and design within the broader context of the University of Southern California. This Dean is energized by USC’s multidisciplinary resources and cooperative possibilities; and has the insight and ability to leverage the university’s resources in conjunction with the opportunities and diversity present in Los Angeles. Equally, the Dean facilitates the creation of art and design, the production of scholarship and development of the professions, and extends USC Roski School of Art and Design’s reach and positive impact on USC and society as a whole.

The Dean is the chief academic, administrative, and fiscal officer of The USC Roski School of Art and Design reporting to the Provost and serving as a member of the Provost’s Council. The Provost’s Council includes the deans of the Dornsife College of Letters, Arts and Sciences and 18 professional schools… Read more

About the Roski School of Art & Design

The USC Roski School of Art and Design at the University of Southern California, founded in 1883, is the oldest art school in Southern California and is among the leading visual arts institutions in the country. The school continues to build new programs reflective of Los Angeles and the Pacific Rim, 21st century expression and mediums globally, while maintaining its history of education in art and design, and in integrating practice and theory. The Roski School is committed to blazing new paths in arts education, and leveraging every advantage of a major international research university that resides within this creative capital of Los Angeles. 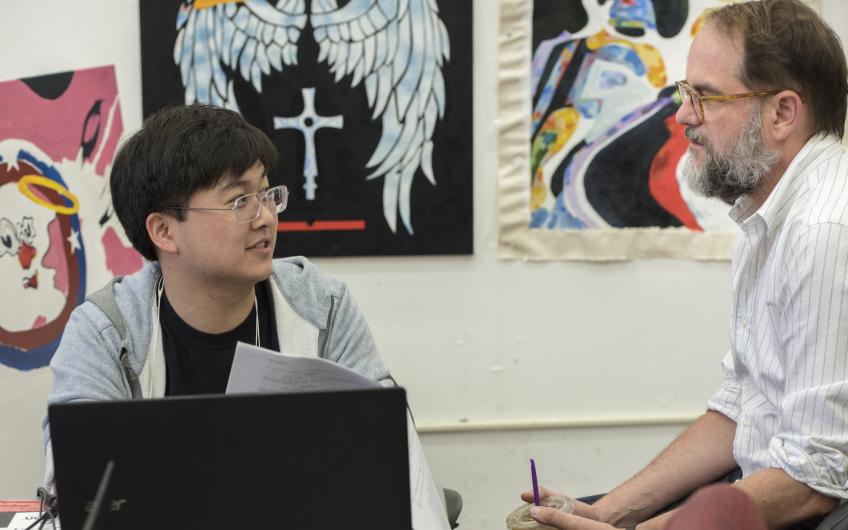 Read more
In 2006 Los Angeles arts patrons Gayle Garner Roski and Edward P. Roski Jr. pledged $23 million to the USC School of Fine Arts. The gift is believed to have been the largest single donation to a visual arts school in the United States. Gayle and Edward Roski are longtime patrons of the arts community in Los Angeles, as well as strong supporters of USC. Gayle Roski is an accomplished painter and alumna of the USC School of Fine Arts, and one of Los Angeles’ most ardent and active cultural ambassadors. Edward Roski, chairman and CEO of Majestic Realty, graduated with a B.S. in business administration from USC, and serves as a member of the USC Board of Trustees.

In February of 2012 USC announced the formation of the Robert A. Day Professorship. Robert Day is a distinguished philanthropist, community leader and arts patron. Mr. Day is Chairman and President of the W.M. Keck Foundation, and, in addition to his support of discoveries and developments in medical research, teaching and patient care, he is a long time passionate supporter of the arts. Recent gifts, including those from the Del Mar Schnabel Foundation, facilitated the creation of a new Master of Fine Arts in Design to add to the existing Master of Fine Arts and the Master of Arts in Curatorial Practices and the Public Sphere. The MFA in Design expands USC Roski and is housed in a new facility in Los Angeles’ flourishing Arts District, just minutes from USC’s University Park and Health Science campuses. These gifts also provide for more fellowships and awards. Gifts include endowing the MFA program with full-ride fellowship, full tuition and living stipend. Other funding opportunities include the International Artist Fellowship, which provides full-ride support for one MFA recruit each year, and a recently created post-graduate teaching fellowship which offers a subsidized faculty appointment, studio space, and continued mentorship from faculty.

Starting in 2014 the school began to increase its senior faculty and made a group hire of seven globally prominent artists. Another eleven full-time hires were made of renowned artists, designers and scholars to add to its already acclaimed faculty. Additionally, one of the world’s leading scholars on contemporary art has joined the faculty and established a model that has contemporary critical theorists and practicing artists working together collaboratively. The hires have added expertise in areas such as interdisciplinary arts, social practice, public art, performance art, and 3 dimensional design adding to The Roski School’s traditional foundation of core disciplines that include painting, drawing, video, sculpture, photography, ceramics, printmaking and graphic design. The BA degrees in both art and design continue the school’s studio model and facilitates cross-media and cross-disciplinary practices within Roski and across USC as a whole. The BFA focuses on a rigorous studio practice in art and design with faculty mentors, and a BFA in critical studies.. Undergraduate art and design degree studio classes are complemented by traditional art and design intensives. Undergraduate applications have continued to increase from around the globe, aided by increased funding for scholarships and a new critical studies curriculum.

The Roski School of Art and Design benefits from being located in Los Angeles and new faculty hires reflect more than ever the diversity of the student body and the city. The Roski School has strong relationships with the city’s important artists, museums, galleries, cultural institutions and creative businesses including The Getty, The Broad, The Main, California African American Museum, AIGA, A+D Museum and many others.

Among the school’s alumni are internationally acclaimed artists Ken Price, Robert Therrien and Paul McCarthy, as well as artist/critic Peter Plagens and emerging artists such as Amanda Ross-Ho, Elad Lassry and Dianna Molzan. Additional information about the school is available at: https://roski.usc.edu

The University of Southern California is an Equal Opportunity Employer and committed to diversity in hiring.